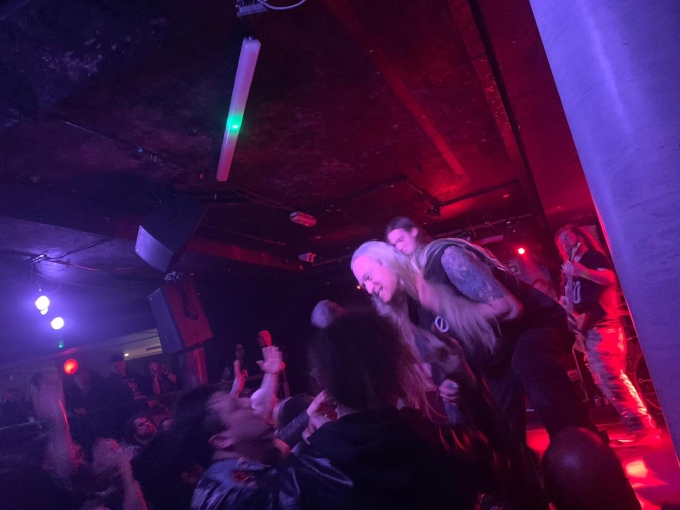 exaggerated statements or claims not meant to be taken literally.

… and that’s my opening statement, such was this momentous performance, much of what I’m about to regale you with will be undoubtedly prone to ‘hyperbole’ – however, I can say with absolute assurance, it’s all justifiably deserved !!!

So, some background – late last year Memoriam announced the first of many shows for 2020 and I immediately booked tickets for I and my very, very good friend Danny.

I’ve know Danny for a good few years, working alongside each other on a daily basis, he’s the kind of guy you can trust to have your back, moreover, we enjoy a common love of films, comics and music all accompanied with our unique brand of humor and culture that many outside of our small circle will understand !!!

The had stars aligned, we both had the day off, wives, kids, cats and dogs where all respectively packed off and taken care of – as such we inaugurated what hopefully will become an annual affair – Man Day !!!

It was our intention to have somewhat of a more ‘explosive day’ but Danny was nursing his head from his previous night out watching Megadeth, and I nursing a stinking cold, bad mood as well as marching into the sublime mediocrity of middle age didn’t present the most dynamic of duos …

Still, opening up with a cold beer, we perused a slew of comic book shops, including Orbital, Gosh! and Forbidden Planet. Danny picked up some missing numbers from Silver Surfer and The Punisher I opted for stuff from Adam Hughes, Jocks Green Arrow and an issue of Wolverine by Alan Davis !!!

As the sun set we marched onwards to Camden as showtime loomed over the horizon – alas Mega City Comics had already closed, we settled amongst the throng in The Worlds End for the first of many more beers !!! 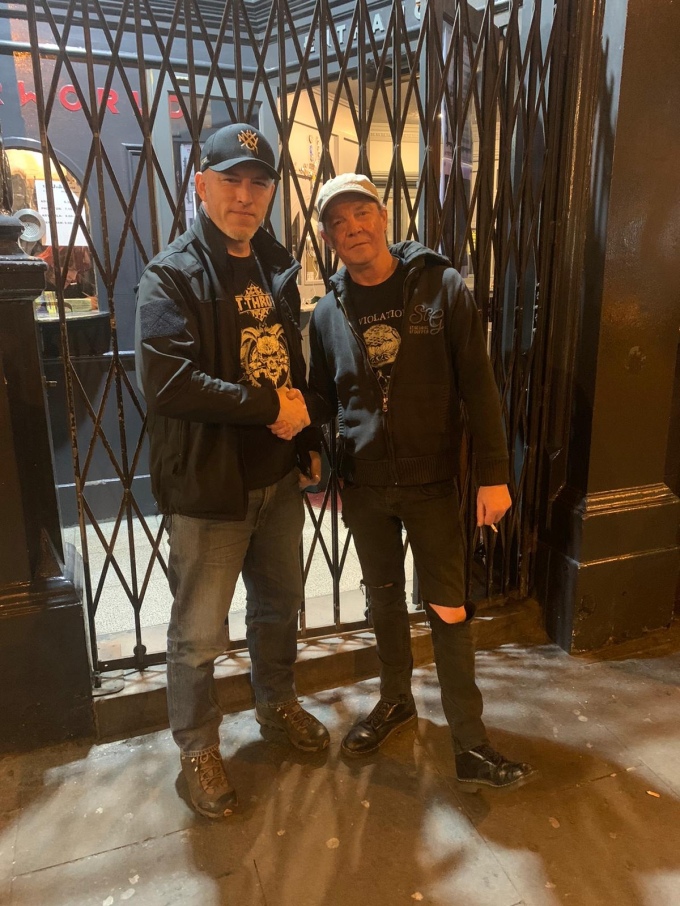 On entry to The Underworld, suitably refreshed we bumped into Frank Healy, Memoriam’s bassist. Gregarious, unassumingly charming and genuinely pleased to see us – we briefly spoke about the drive down to London, plans for dinner, he was looking forward to a hearty kebab post show – and his thundering bass tone, which wryly quipped was due to his dwindling hearing – top man.

Naturally, first port of call, after grabbing some more ice cold beers, was the merch table – some great shirts, and regrettably I wish I’d picked up the show exclusive shirt, hopefully they’ll make their way on line over at their Big Cartel store … 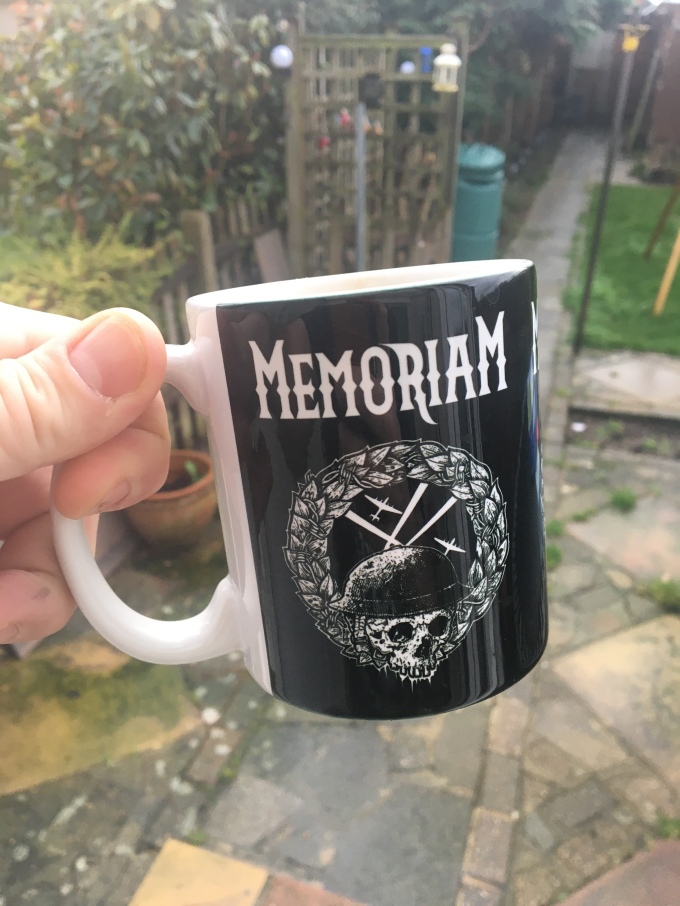 But, I did pick up one of these, a coffee mug, resplendent with their demo’s artwork – this got put to good use as soon as I was through the front door …

Whilst at the table, drummer Andy Whale happily chatted to us, gave some incredible insight to the bands plans and future, I’ll keep quiet here, but seriously keep an eye out – Memoriam will be as busy as ever. Andy also spoke about one of his other bands – Darkened, and we energetically enthused over its style and tone. We also chatted about Memoriam’s unique DIY ethic, which allows them to tour on weekends, days off, and yet still remain committed to work, family and other endeavors – we both agreed it’s a model many bands should explore, keeping it fresh, exciting and vital. 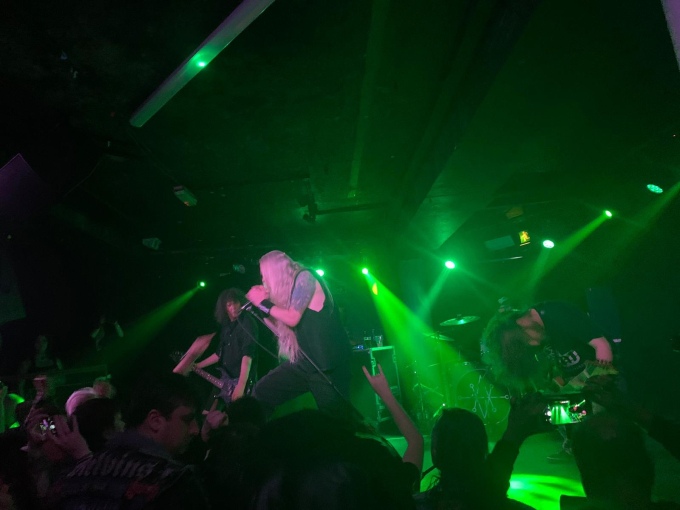 We did also bumped into Karl, however, my inital greeting of ‘I love Saxon, and I’ve always wanted to meet Biff Byford’ was perhaps not the best opening gambit, but he heartily shook my hand nonetheless before disappearing into the depths of The Underworld …

As the opening bars of the instrumental ‘Memoriam’ faded the band quite literally exploded onto the stage, Memoriam ripped open with Undefeated – the sound, tone and pitch was perfect. Wether this style or genre either is or isn’t your thing – this was a masterclass in sonic assault and I’d urge other bands to seriously pay heed.

The stripped down, lean and taught approach really lent itself to the live setting, and whilst this track, on the album is a firm favorite, here it took a life of its own and sounded more venomous, vicious and vitriolic than ever. As aforementioned Franks bass, rumbled with a groove and warmth, and an assured confidence and prowess that clearly cemented why as one of the scenes elder statesman he’s a legend and consummate professional. He prowled and worked the stage relentlessly, putting many younger contemporaries to shame.

Karl too, exploded with a power, an unbridled fury that literally gripped and captivated the audiences attention from the off and throughout … 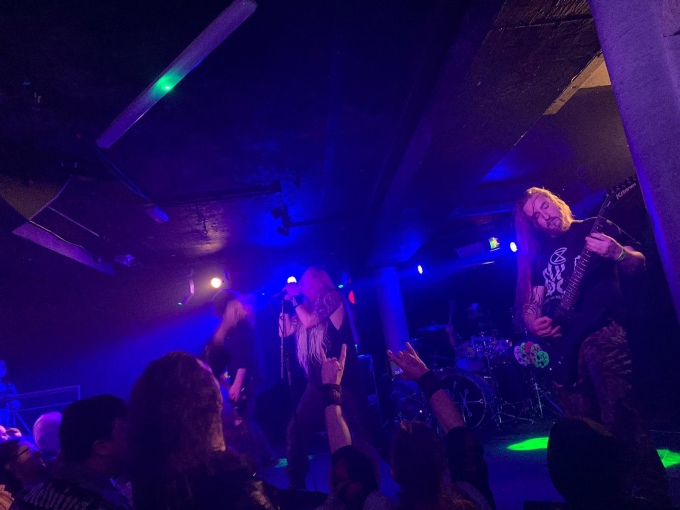 The passion and integrity, and thinly veiled vitriol and disdain of the current socio-political state was palpable and delivered with integrity, yet as any good showman and frontman does, this was ably delivered with aplomb and a wry smile, extolling that perhaps we all shouldn’t take our selves too seriously …

That aside, clad in black combat boot and cargo pants, and an intriguingly sleeveless ‘Singularity Sauce’ tee, his long mane of ice blond hair made for an iconically striking visual performance and decades of touring has not dulled his edge, I’d wager his vocals have never sound more ferocious, powerful or confident.

Andy was clearly at home and in a happy place on drums, working what appeared to be a stripped down ensemble, almost a jazz like set up, was an absolute pleasure to observe and clearly was having no end of fun holding it all together. Taught, tight, precision drumming, an absolute wall of pummeling beats alongside Franks bass gives this blend of ‘Old School Death Metal’ real groove, swing and a warmth and a texture many other bands live are simply devoid of. He’s clearly the heart of the beast, and imbues it with life, really making it a living, breathing monster !!! 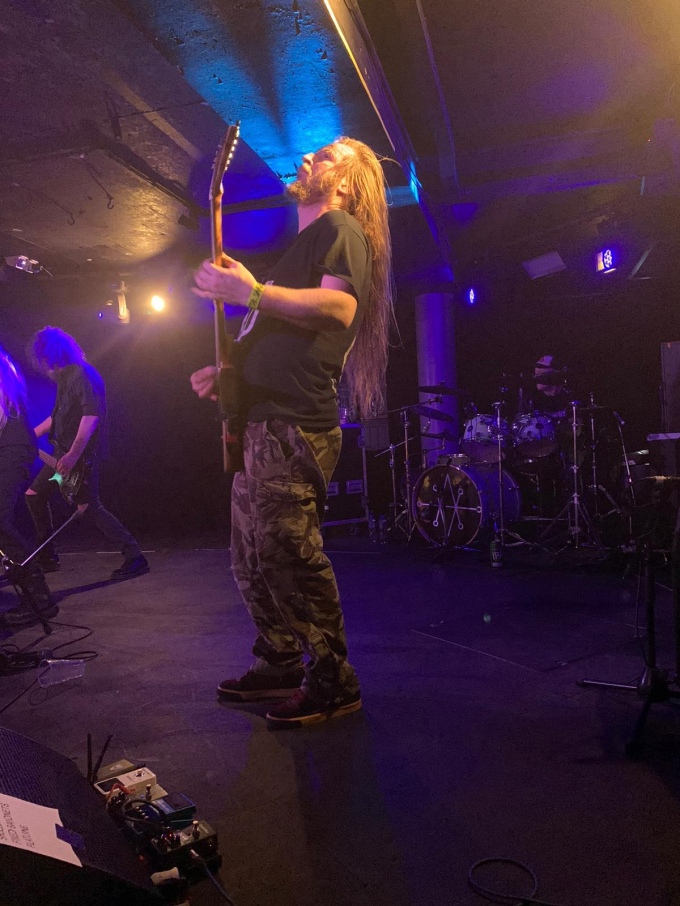 Last but by no means least, Scott Fairfax the crypt keeper of riffs, the undisputed king of rhythm and lead, flawlessly switching between either with verve, style and panache – Ive long since seen such a player so confidently happy and at ease live – and as the all the band collectively did, his crunch and attack added more spite and vengeful sonic assault to these tracks !!!

Live, is clearly a very comfortable place for Memoriam and they don’t hide the fun with which they approach the stage – which, incidentally they owned !!!

Whilst a slightly shorter set than expected, they pulled out what I’d regard a fan favorite set of classics from their growing back catalogue.

Undefeated was hotly followed by Dronestrike, originally appearing in demo form on their 2nd 7” and subsequently on their sophomore effort as a bonus track in revised form. If I had to choose which version is my favorite, whilst both recorded versions are truly stellar, trust me, when I say live is the ultimate version !!! 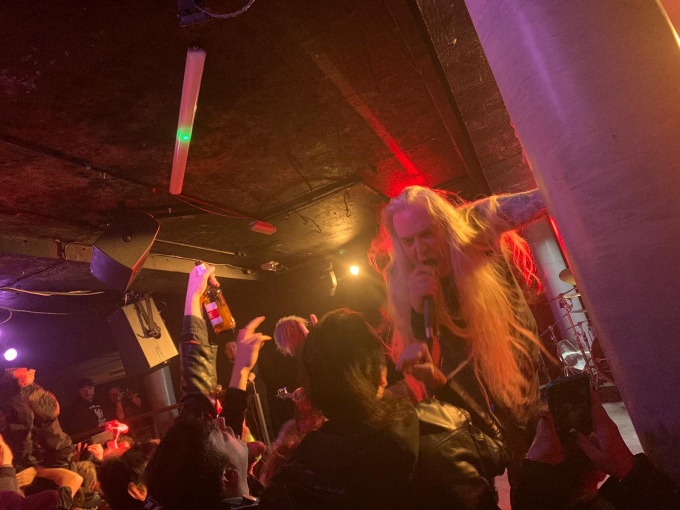 Karl rallied the partisan crowd with a rallying cry for unity over the divisive referendum, and as such the attending crowd from all over the globe warmly cheered him on – the incisive Austerity Kills was a timely reminder of what the general public have endured and enshrined Memoriam’s relevance forevermore.

Showcasing material from the bands latest LP Requiem for Mankind led the final charge as they subsequently went on to power through Resistance, Shellshock and as I prefer to nickname it ‘Fix Bayonets’ – this was all brought to an apocalyptic conclusion with the devastatingly heavy Flatline …

Opening with a faded heartbeat which transcends into a failing life support alarm – many of tonight’s songs were further embellished with small sound bites and soundscapes which really added to the songs color live, a really creatively cool touch which certainly wasn’t lost on me.

Sadly, no cover of Sacrileges The Captive and I was dismayed not to hear Surrounded by Death amongst the set, but it was truly taught, power driven, old school death Metal show at its finest and that in itself gave the whole ensemble a magical life of its own – a greatest hits if you will, and would make an arguably perfect playlist for any true fan … 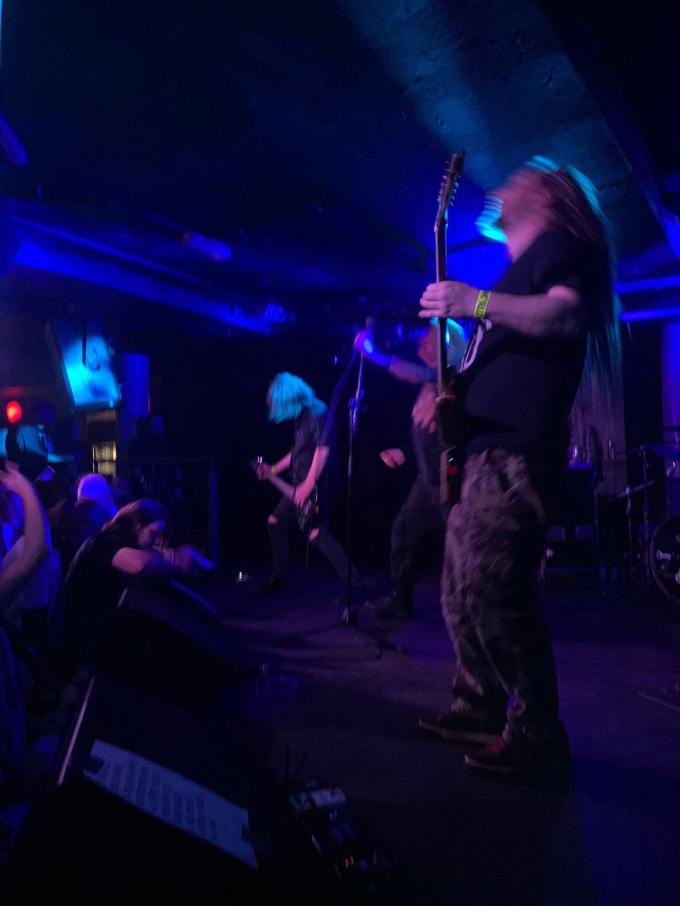 I hope to see them play again very soon, easily one of my top ten gigs of all time – S23

You can catch Memoriam live next this March in Copenhagen !!!